There are some dragons Team Umizoomi met, mostly in Season three.

Milli, Geo, and Bot help their friend Jeannie find all the missing shaped pieces to her dragon kite. It was only shown in the first episode: The Kite Festival.

For more information about The Girl Dragon. click here. She appeared in Journey to Numberland.

He was seen in Umi Toy Store, where he blocked Sir Geo's path in The Knights in Shining Armor Boardgame. He would move unless Geo could get his favorite snack, which was the pepperoni pizza.

They are three young math dragons, one female and two males. The female is a Shape Dragon and the males are a Pattern Dragon and a Number Dragon. They hatched from their eggs.

Out of all the dragons, he is the biggest and strongest. He's got big feet that can stomp anything flat and a strong tail that can smash anything. He also has a saddle on his back that looks similarly like Yoshi from the Super Mario Series (particularly Super Mario World).

The main antagonist dragon. His name says it all because he is really stinky.  Team Umizoomi encountered him in the passageways to all three levels. Everytime they get away from him and close the exit door, he says "That Stinks!" and then walks away unhappily.

It was just a picture of the dragon skateboard with four orange wheels belonging to Logan in The Boy with the Dragon Skateboard. The team must find the missing pieces to Logan's dragon skateboard when some bad guys called The Troublemakers as their first appearance destroy it.

Milli, Geo, and Bot are Umi Knights who must save the kingdom by helping Max the dragon find his glasses because Max is blurry without them.

Girl Dragon
In the episode: Journey to Numberland.

Max The Dragon
In the episode: Umi Knights.

Jeannie's Dragon Kite
In the episode: The Kite Festival. 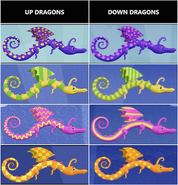 The Up & Down Flying Dragons
In the episode: Let's Play Math Dragons! 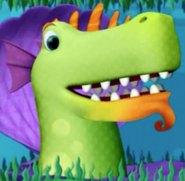 The Raining Dragon Flowers
In the episode: The Sunshine Fairy.
Community content is available under CC-BY-SA unless otherwise noted.
Advertisement