Team Umizoomi Wiki
Register
Don't have an account?
Sign In
Advertisement
in: Episodes, A to Z, P,
and 54 more

The team must help the zoo's new arrival, Purple Monkey, entraces to his right exhibit when he accidentally is dropped off in the wrong exhibit.  When the team find purple monkey gets dropped off at the wrong habitat, he ended up in the penguin home. Next, they crossed a turtle swamp. Then, they have to get past a mean and fierce tiger in a tiger forest. Finally in time, the team make it to Purple Monkey's home the monkey jungle.

Intro: Day at the Zoo

Team Umizoomi are in their helicopter and are at the zoo.

In Snow Much Trouble

When the zoo truck drops off Purple Monkey in the wrong exhibit, he finds that he is in the Penguin enclosure. It sure is cold.

Team Umizoomi walk across nine turtles to get across a turtle swamp.

Yellow Key for The Yellow Door

The team find the longest yellow key to get through the next exhibit.

Milli disguises Umi Car by putting tiger stripes on him. Suddenly, a spider causes Purple Monkey to sneeze, and then Umi Car's stripes fall off and the Team must get away before they become lunch for the tiger.

Eventually, the Team get away from the tiger and are safe in the monkey jungle. Purple Monkey is really happy he is back in the right exhibit. 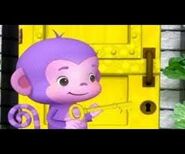