Shooting Star is a tiny horse who appears in the Special of the same name. He is the horse-friend of Team Umizoomi. He has a brown coat, whitish-blondish mane and tail, and a star-shaped marking on his flank.

Shooting Star really loves helping others and he was a little horse with big dreams that soon came true. He loves to race, gallop, and give Team Umizoomi rides on his back. Milli is also very sweet to him.

One day, while visiting the Umi City Horse Ranch, Team Umizoomi meets a little horse named Shooting Star. He wants to help pull wagons across the ranch, but he can't even budge an empty wagon. Sadly, he trotted into the barn to be alone. The team went over to comfort him, and Milli wishes that they could help him.

Luckily and unexpectantly, Geo leaned his hand on an old wood plank which was really a secret little hole that had an old script on it. The script was really the key to the locations of the four legendary Golden Horseshoes. It is said that any horse wearing all four Golden Horseshoes will grow to be the biggest horse in Umi City.

Cutting to the chase, the team helps Shooting Star find all the Golden Horseshoes, and becomes the new horse to pull the hayrides, which is the best job on the whole ranch. 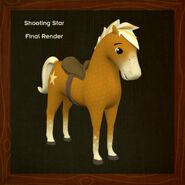