This is a crossover game with Team Umizoomi and Dora the Explorer for the Nintendo DS.

Team Umizoomi has quite a day planned; they are going to use their special airship to take some of their Nick Jr. friends on a fantastic flight. However, Swiper the Fox and The Shape Bandit steal the airship, took it apart, and scattered the pieces everywhere. Team Umizoomi must team-up with the competitors Dora and Boots to collect all the missing airship parts and save the mission.

Go on the adventure to find the airship parts in four different worlds (Grassy lands, Beach, Jungle, and Mountains) each with four levels to find the airship parts. Collect air crystals along the way; they're the power source for the airship. Collect as many as you can to earn a silver High-Flyer badge and then a gold High-Flyer badge for all the levels. Each level has a color wand. After the airship is built, the color wands will paint the balloon with beautiful colors. Each wand has a stick with a star that has different color(s), which indicates its color(s).

Pablo pointed out that the balloon parts are at the beach. Be sure to tap the tall palm trees with white trunks three times to get an air crystal, and blow into the microphone to find the air crystals in the sandpiles. The microphone is very useful to ride the rafts across small bodies of water. On level three, help Dora sail the ship to find a balloon part.

Dora's cousin Diego pointed out the airship ropes are in the jungle. Remember, tap the trees that have big and long leaves three times to find an air crystal and scribble the flowers to find more air crystals. Use the stylus to draw a line straight up or down to climb the vines. On level three, help Dora drive the Animal Rescue Truck to find one of the ropes.

The episode points out that the engine parts are in the mountains. Since this is the final world, the levels here are the most complicated. Remember that. The big pine tree are the trees to tap three times and use the microphone to blow on the snow piles to find more air crystals. There are zip lines as well. use the stylus to draw a diagonal line from top-left to bottom-right to ride the zipline. On level three, help Dora drive the mountain jeep to find the exhaust pipes.

Play three different airship games with Team Umizoomi. This mode isn't available until after Adventure Mode is done for.

Help Geo put sections of the airship together by looking at his blueprints and using the stylus to drag each part in its proper place. There are four sections: the body, the balloon, the ropes, and the engine.

The balloon looks drab. Help Milli paint the airship. Color Wands are needed which are found in Adventure Mode. Select a color with the stylus, then scribble onto the section that you want the color to be.

It's time for the fantastic flight. Help Bot drive the airship by collecting air crystals and avoiding dark clouds and birds. If you drive over a wind gust, the airship will do a fun trick.

You can change the volume of the music, sound effects, and voices on a scale of zero to ten. Use this when you're not comfortable with the sound effects.

You can't choose to play any of them anytime you want. Each level (except the third) of each world you play at random. They exchange roles with use of a giant spring to get over big cliffs. There is a map on the top of the screen with six color dots that mark different things: purple marks Dora, blue marks Geo, pink marks Milli, yellow marks Boots, green marks Bot, and the gray marks the end of the level where the airship part is.

Sometimes, there are obstacles in the way, that can only be cleared by using one of the playable characters' special. It helps the player learn math and Spanish. Beware: the challenges get tougher in each of the different worlds.

There's a gate in the way, and there are three keys each with a different picture on them. Dora will call out the key with the picture. Use your stylus to tap the key. To use the key, use the microphone to say the picture in Spanish. The words change in each world. A list has been provided to which world has which kinds of words. (I. Animals; II. Food; III. Clothing; IV. Nature/Weather)

There's a tall cliff with a platform high above the ground.

A huge gap is blocking the way. There's a bridge, but there are parts that are broken. Luckily, the bridge is in a pattern. Use your ears and eyes to look and hear the kind of platform Milli is on. When there's a piece missing, three different platforms (solid, stripes, and polka dots) will appear above. Use your stylus to select the missing piece, and it will fill in the missing slot. There should be three pieces missing.

A giant cliff is way up high; help Geo make platforms with his Super Shapes. Three different shape outlines will appear above. Bot will call out a shape and you use your stylus to select it and trace it. There will always be three different platforms.

There's a gate in the way that needs a number combination.

No receptions known yet 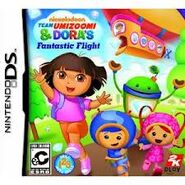 The game cover
Community content is available under CC-BY-SA unless otherwise noted.
Advertisement